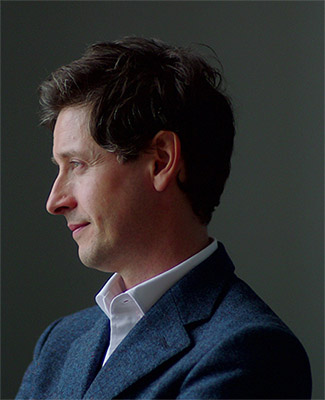 Lachlan Goudie is an artist who exhibits regularly in London and New York. The scope of Lachlan’s work is broad, incorporating portraiture, still life and landscape painting. His canvasses have won numerous awards and in 2013 he was elected a member of the Royal Institute of Oil painters, in London. In addition to painting, Lachlan is also a writer and Arts broadcaster. In 2015 he wrote and presented the landmark series ‘The Story of Scottish Art’ for the BBC. The four episodes were critically acclaimed and Lachlan was nominated by the Royal Television Society Scotland for the ‘Onscreen personality of the year’ award.

Lachlan has written and presented several other documentaries for BBC television – ‘The Art of Witchcraft’ (2013), ‘Stanley Spencer: The colours of the Clyde’ (2014) and ‘Awesome Beauty: The Art of Industrial Britain’ (2017). Lachlan’s most recent films ‘Painting the Holy Land’ and ‘Mackintosh: Glasgow's Neglected Genius’ were broadcast on BBC1 and BBC4 in 2018. ‘Mackintosh: Glasgow's Neglected Genius’ was nominated in the best single documentary category at the Celtic Media awards, 2019.

Lachlan has been a judge across three series of BBC1’s ‘Big Painting Challenge’ and reprised this role on BBC1’s ‘Celebrity Big Painting Challenge’, 2018. He regularly contributes to the BBC World Service radio programme, ‘From our own Correspondent’ and has presented several concerts on BBC Radio 3.

Lachlan’s first book, ‘The story of Scottish Art’, will be published by Thames & Hudson in 2020. Lachlan’s writing is informed by his experience of working as an artist. He is a keen proselytiser for the value of technique and craft in contemporary art and was schooled in painting by his father, the artist Alexander Goudie. The wonder of art: its power to colour and change people’s lives fascinates Lachlan. It lies at the heart of his work as a painter, writer and broadcaster. Lachlan was born and grew up in Glasgow, Scotland, before studying English at Christ’s College, Cambridge and Fine Art at Camberwell College of Art in London.